PowerShell is a task automation and configuration management framework from Microsoft, consisting of a command-line shell and associated scripting language. Initially a Windows component only, known as Windows PowerShell, it was made open-source and cross-platform on 18 August 2016 with the introduction of PowerShell Core. The former is built on the .NET Framework, the latter on .NET Core.

Third-party developers can add cmdlets and providers to PowerShell. Cmdlets may be used by scripts and scripts may be packaged into modules.

This is the concept of PowerShell from Wikipedia. All in all, which we should know is the PowerShell can help us to use many powerful features, like executing ps1 script file in the memory directly with out writing files to the hard disk. What’s more , we can also use the features which .NET Framework provided.

there are already have many powerful Post-Exploitation Framework build with PowerShell, like PowerSploit , PowerCat , Empire and so on. But what we are going to discuss today is loading our shellcode via PowerShell.

We can use PowerShell script to achieve our goal. But before we executing the script, we should check the PowerShell execution policy of your target.

There are six different execution policies in PowerShell.

We can use this command to check the execution policy of your target.(you can use PowerShell command)

Let’s try to execute a PowerShell script file and see what happens.

As we mentioned before, the default policy denied us to execute the external ps1 script file.

Luckily, we can use serval ways to bypass PowerShell execution policy. At first, let’s check out the meaning of some characters and commands.

Here are some useful characters and commands which can help us to execute our PowerShell script file.

you can also use the concise command like this.

Using this method, you can also call the functions in your ps1 script.

we can also use “type” to replace “Get-Content”.

However, this method has disadvantages because the script content is saved to the local disk, so it may be detected by antivirus software when executing certain scripts.

Using “Net.WebClient” to download the remote script file and run it via IEX

then run this command.

“-c” is “-command” and use New-Object to create a Net.WebClient.

However, when we actually execute these commands, it may be intercepted by 360 antivirus software like this.

How to deal with this situation?

The token like “encoded” “IEX” “DownloadString” “http” “Hidden” etc. will be detected by anti-virus software and prevent us from executing commands.

We know antivirus software detects these specific tokens. So we can use methods like string concatenation to bypass the detection anti-virus software.

let’s run these commands via cmd.

We can also use replace for string concatenation.

In Cobalt Strike , we have two ways to generate PowerShell payload

but as we mentioned before, some tokens are detected by the anti-virous software.

what’s more, transferring base64 encoded shellcode is also not that smart. 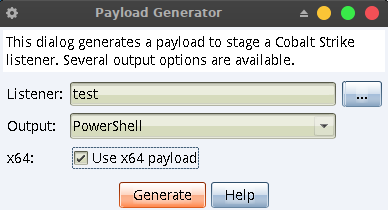 Choose your Listener and set the Output as PowerShell.

After clicked the Generate button, you’ll get a PowerShell Script File.

Then host this file to website and run processed command via cmd of your target.

PS. to bypass other anti-virous software , we can do some obfuscation using Invoke-Obfuscation or hide our script file to png file .

For example, let’s try to hide our PowerShell payload to a png file using Invoke-PSImage.

1.ps1 is your PowerShell payload File, 1.jpg is your image file.

Run on your targets

At last of this section , I’ll give you some tips while using PowerShell